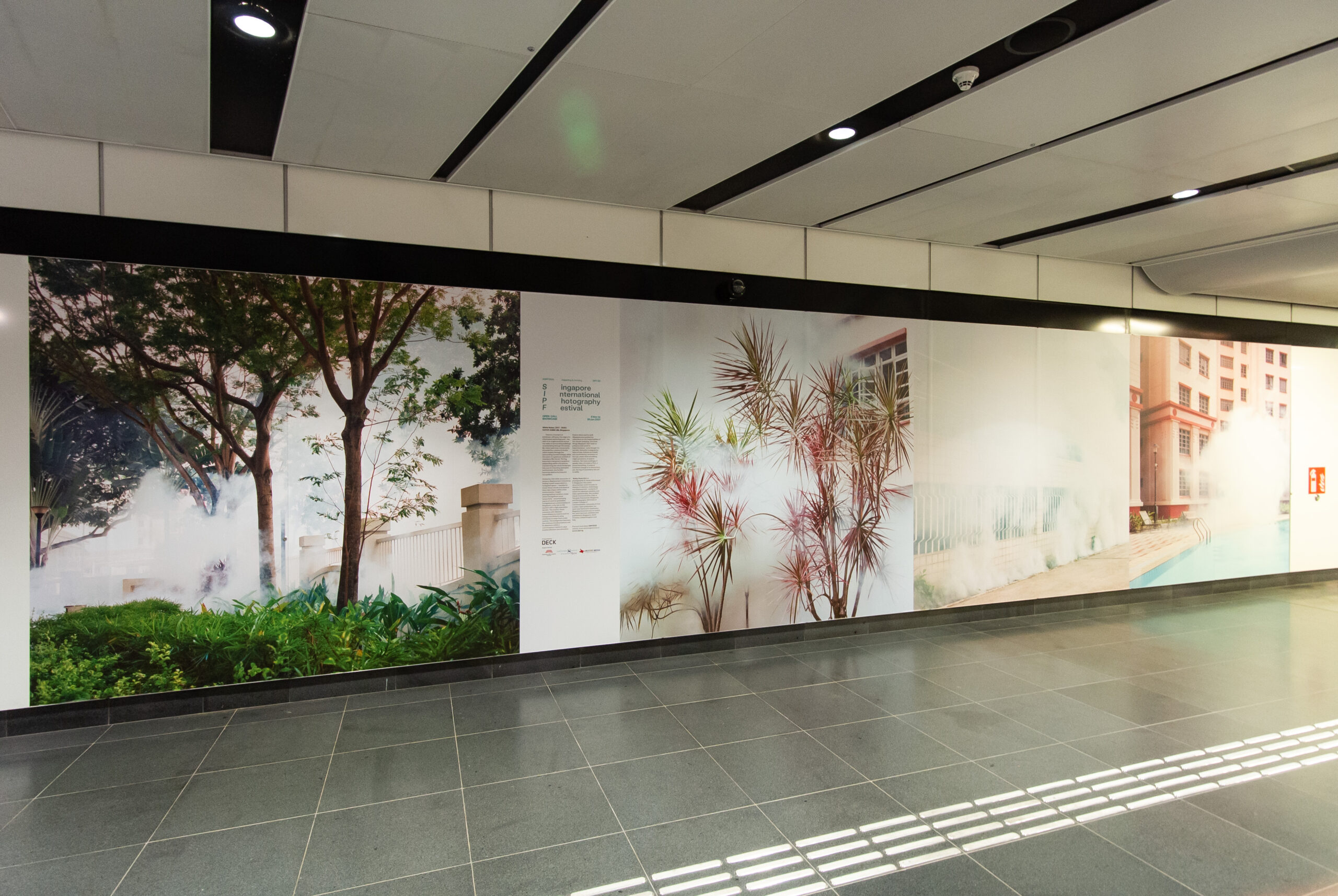 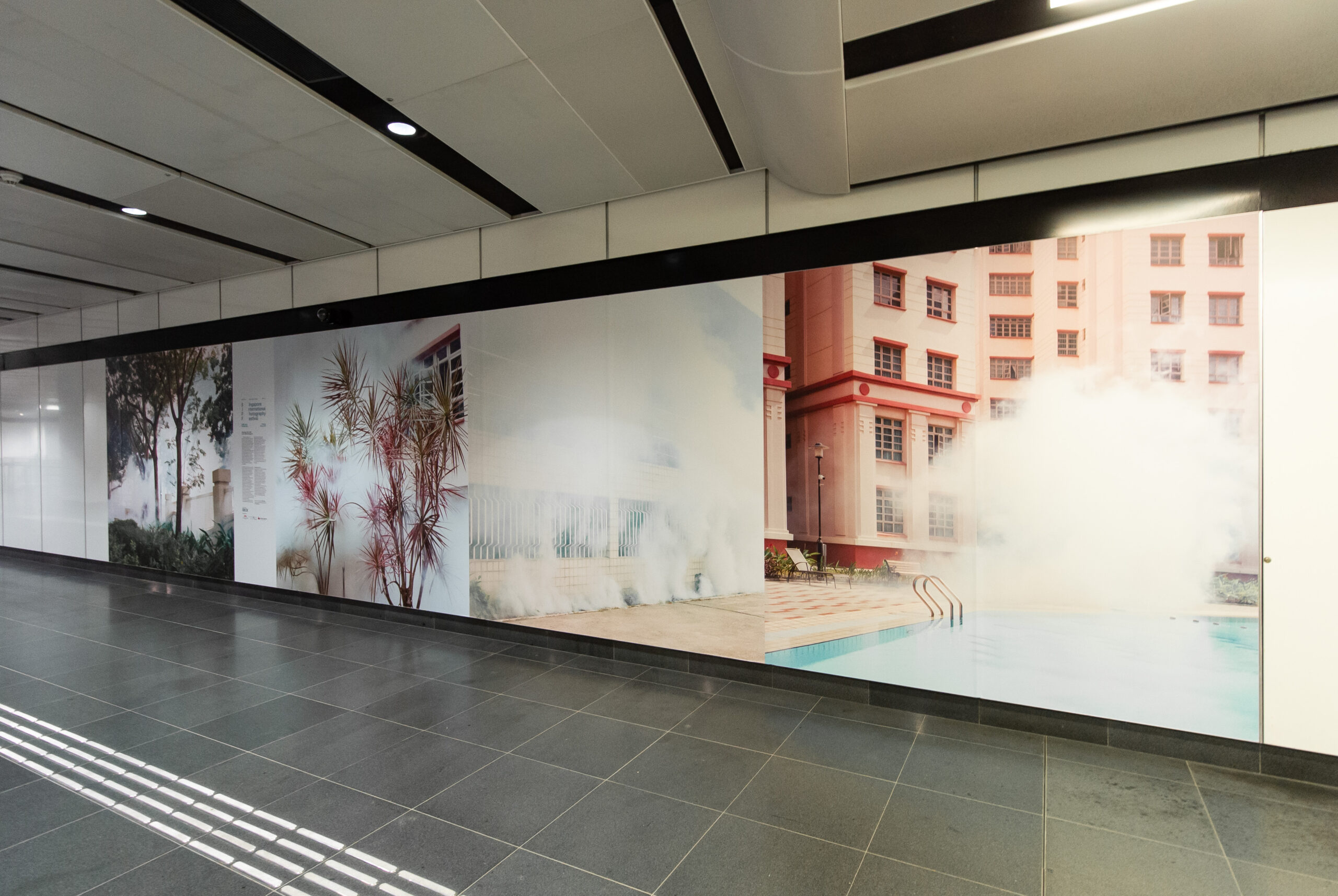 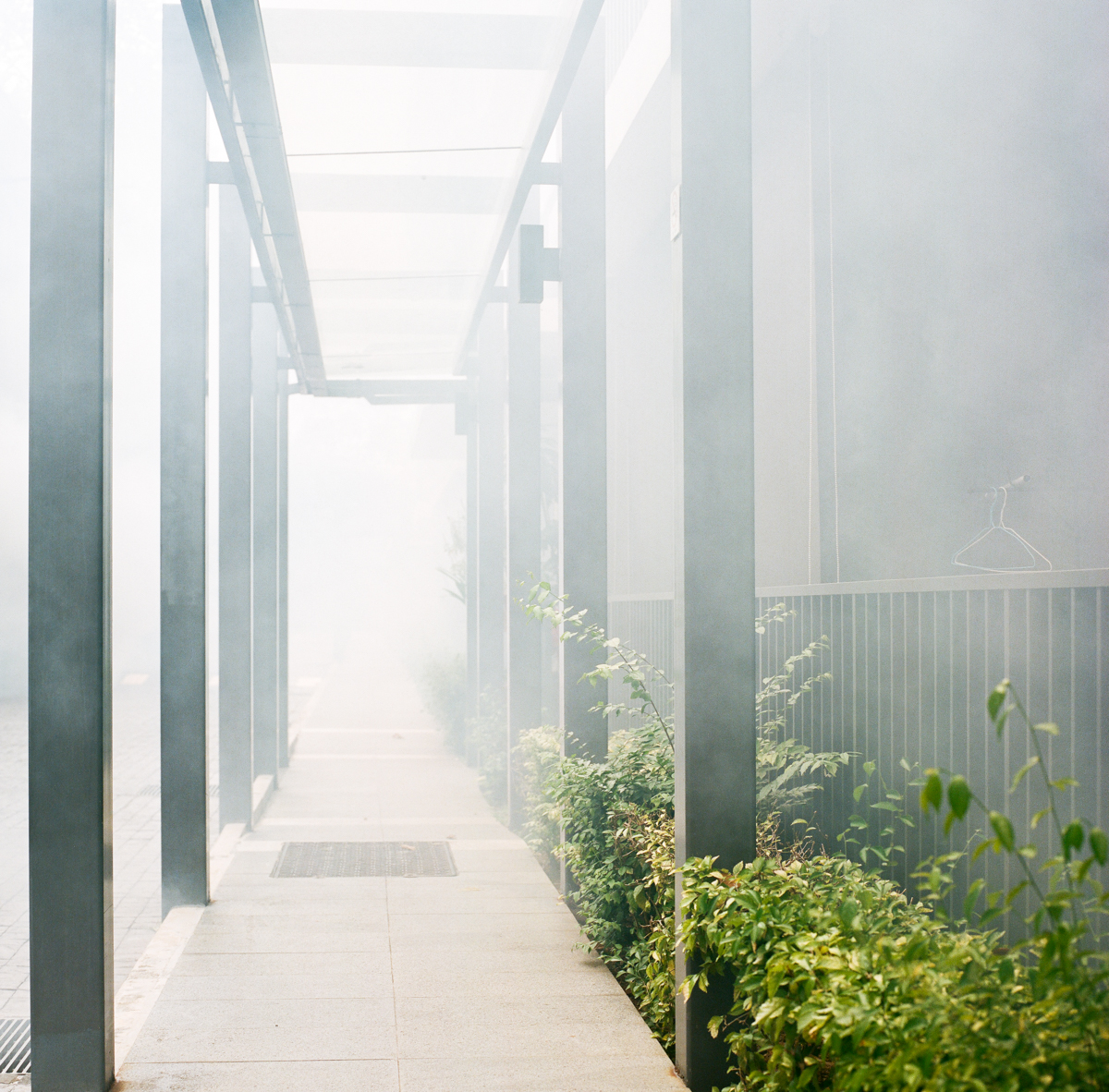 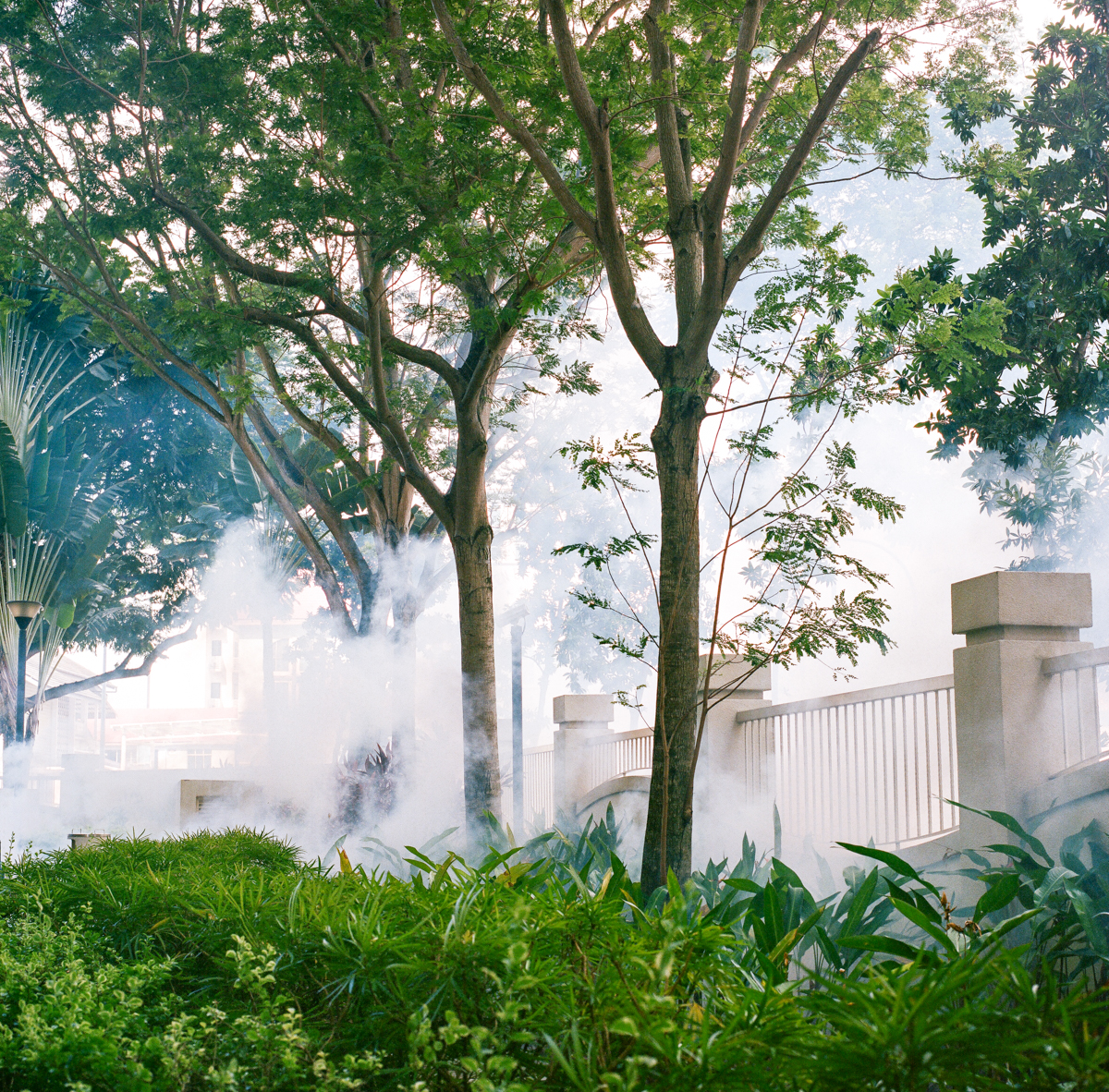 Sitting by the edge of a chlorinated swimming pool, there is a moment of blindness. The whir of an engine echoes across the walls of surrounding buildings, reverberating through the estate. My vision is shrouded by a plume of smoke, snaking through the foliage around me, while the scent of a gaseous chemical cocktail fills the air. The fog becomes a temporary sculpture, suspended within city spaces, transforming the visual landscape into a haunting dystopia: the familiar becomes abstracted beyond recognition.

Guided by this initial encounter of sensory displacement from a fumigated space, I decided to chase these clouds and observe them taking shape in other environments. Fumigations are common in Singapore, a city set on the equator with a high population density. The country faces concerns with insect-transmitted diseases such as Dengue and Malaria, and uses chemicals to keep them under control. I began accompanying teams of control specialists, photographing transitory areas where fumigations occur. The antagonism between the ominous cloud’s presence and its departure from a commonplace habitat is what suspends attention and attraction.

When I reflect on the theatricalities of the cloud’s conjuring, I think of its elusive, fleeting appearance and swift disappearance. I covet its impermanence, seeking to preserve it. Humanity is plagued by fears of loss, finitude, and death, but we are comforted by reminders of the lost and preservation through memory. More excitingly, impermanence speaks of a state of flux, a future becoming. A pulse of imminent change is on the horizon, yet, the fog of uncertainty has yet to settle. 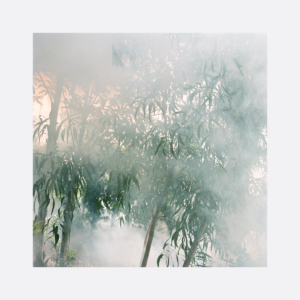 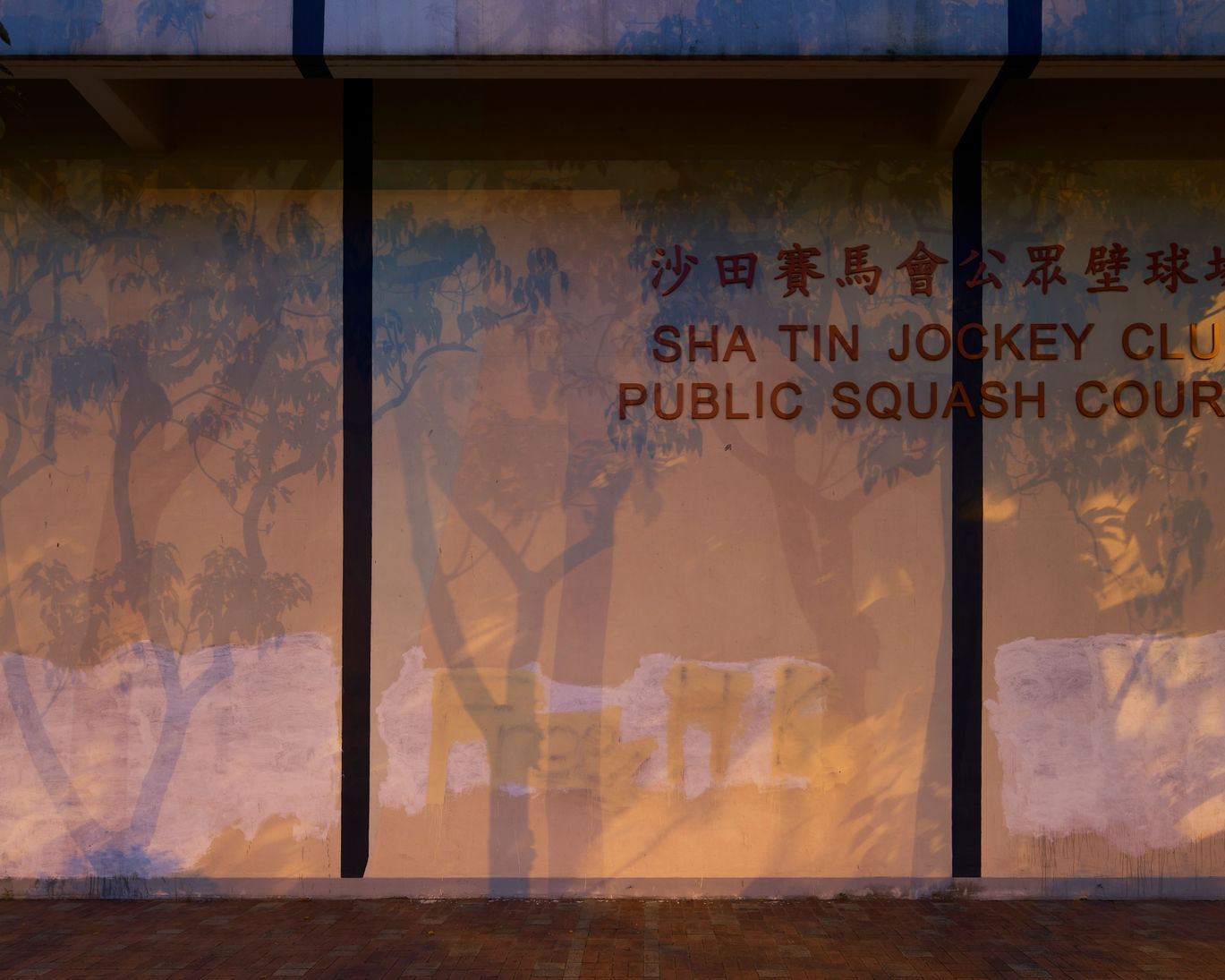