Liza Ambrossio (1993, MX-FR) is a transdisciplinary artist who lives and works mainly between Spain, France, and Mexico.

She began her artistic practice at the age of sixteen when she asked an ancient maid from her mother’s house to steal the photographs from the family albums looking for traces of a dark past for which there seemed to be no evidence.

At the same time in her native Mexico City, Ambrossio portrayed her transition from adolescence to adulthood looking for ways to survive from a distance during a chaotic and stormy process of emancipation from her family. After the suicide of her roommate and best friend from adolescence, she inherited his job as a “nota roja” photographer (police press), covering murders, accidents, and torture by drug traffickers at dawn for a local newspaper.

Ambrossio goes on a journey of psychic and physical discovery flooded with disturbances, magic, trauma, dreams, and visions. In these moments, she discovers that the hell inside contains the same hell that explodes outside. Her universe breathes a real attempt to understand the powers and weaknesses of the mind as a way to scrutinise the human experience, which goes through the past, present, and future time.

Ambrossio is incorporating symbols alluding to witchcraft, eroguru, mythology, memories, and legends that she mixes with her written narrative, photo sculpture, photo books, objects, installations, sounds, paintings, drawings, performance, and videos that she unites by free association, schemes promoted by her own theories related to psychological manipulation and its influence on the continuation or rupture of the power professed by the different social structures.

Their approaches have an intense but anarchic relationship with chance and instinct and imply the destabilisation of female canons that threaten the possibility of exceeding ethnic, sexual, moral, religious, and political limits. 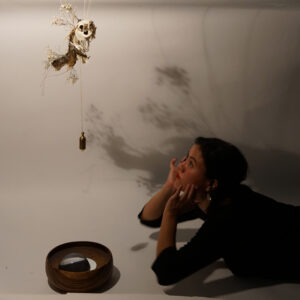 “In my memories, I know that I saw on TV the faces of a group of hysterical women. I was…